Ever wonder what’s the story behind the cover design of a book?  What’s behind the concept?  How did this idea come into being? 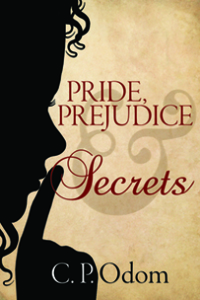 So many things are taken into account in a design, the target audience, how it will look as a thumbnail, what is the message to be conveyed.  Sometimes what seems the most obvious choice isn’t the easiest one.

Here, C P Odom tells us how the cover to Pride, Prejudice & Secrets came about.

Ellen Pickels has done the covers on both my previous novels and was scheduled for this one also.  But she didn’t want to try to come up with any cover ideas until she had had a chance to go through the book.  Unfortunately, she was slammed by the fact I was about fourth down in the publication queue, so Christina and I figured we’d have to wait for a while.  Christina found a couple of cover ideas and sent them to Ellen, but we knew she hadn’t started working on my book.  However, she had read the back blurb, and she came up with the idea that became the cover, with the silhouette of a young girl holding her finger to her lips as if to caution silence and secrecy.  Both Christina and I loved it at first sight, and Christina pointed out that it would make a great thumbnail.  It also works because it doesn’t try to present an explicit illustration of Elizabeth Bennet, thus avoiding the problem that most readers have wildly different ideas of what Elizabeth ought to look like (most, to be honest, more influenced by the 2005 movie or the 1995 miniseries on BBC).  In fact, we tried a few trifling changes to that first idea of Ellen’s but decided they didn’t look as good.  So the final version was also the initial version.